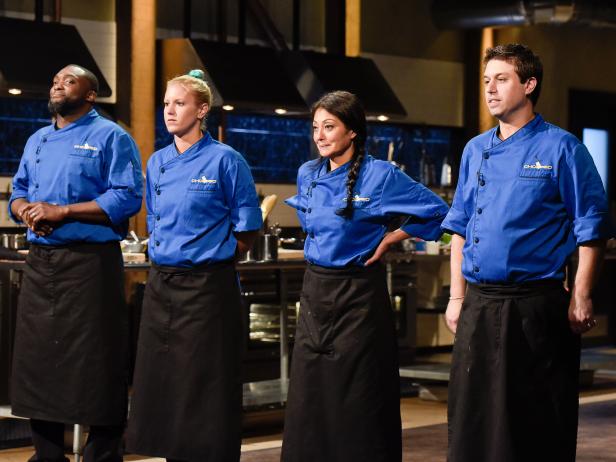 Posted at 14:49h in News by Marc Bynum Creations

In this new Impossible tournament, Chopped is switching up the format: Chefs will compete in three preliminary rounds for a chance to earn a spot in the finale, where the champion will get the opportunity to compete against Robert Irvine in a wild-card round. Just for getting there, the champion will pocket $15,000, but upon beating Robert, he or she will win an additional $25,000, for a total of $40,000.

On tonight’s episode, four very accomplished chefs who’ve competed successfully on Chopped before have returned to take on the most-impossible mystery baskets, but only one of them will earn a spot in the finale for an opportunity to get to Robert.

Chef Marc came into the competition calm and confident. Despite goading from Robert, he kept his cool and kept on cooking, turning out three dishes that outdid his opponents and earned him the win. In the first Round Marc created an “eggs in purgatory” dish that Ted likened more to hell, because it was so overloaded with cayenne pepper — an accident on Marc’s part. For his entree Marc presented mackerel two ways, hot and cold. Alex thought he did the ingredients justice, and Chris was blown away by his utilization of the pork stomach in soy. The dessert round posed the biggest problem for Marc, as he couldn’t find his concept until the last five minutes. His take on Southern apple pie was a favorite for Robert. In the end, Marc earned the first spot in the finale and a chance to go up against Robert on Nov. 12.