Hush: The rhythm of a hometown chef.

Whether its menu, music, lights or decorum Chef Bynum and MBC pay attention to the details, so they can create the best concept/recipe for you. Functionality and Profitability with the focus on hospitality. MBC brings over 25 years of industry experience you can trust. Lets build the concept/recipe of your dreams Creates concepts from the ground up, being sure to always use fresh, local sourced ingredients when available, paying respect and homage to the cuisine and the culture, let me and my team create for you.

Culinary Knowledge and Technique are the foundations of cooking no matter the cuisine Chef Bynum prides himself on embracing that cuisine so he can teach you the ropes. Let Chef teach you the ropes with his corporate workshops and master classes.

Chef Marc is determined to build the ultimate culinary showcase in the kitchen for his clients. With decades of experience, Chef Marc captures the vision his clients. 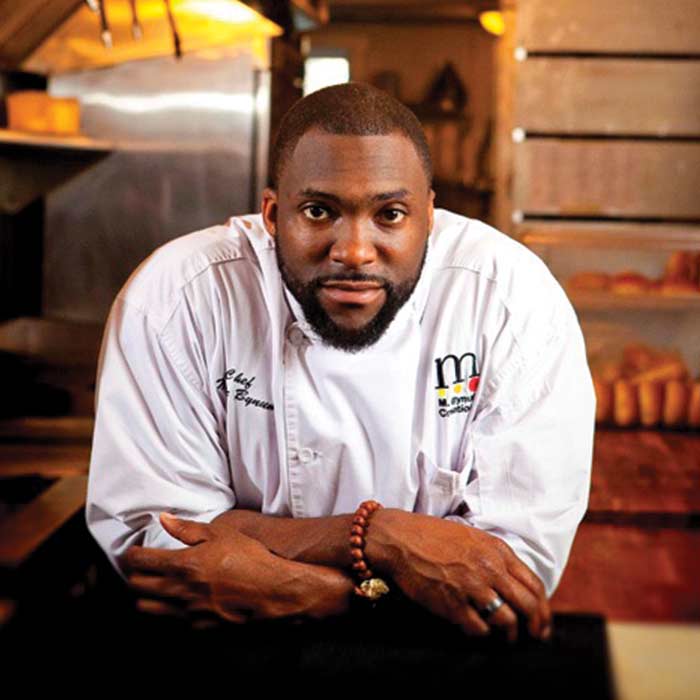 Marc Anthony Bynum, three-time Chopped Champion, was born and raised on Long Island among four siblings. The initial draw to him becoming a chef was watching his mother cook for the family and loved ones, he observed “the joy on people’s faces while eating”. He always had a gift with his hands, even at an early age, and he has translated that to the presentation of his dishes.

In June of 2010, Chef Marc appeared on popular Food Network cooking show, Chopped.  He claimed victory twice before coming up short in the season finale of Chopped Champions. The success of the show coupled with his thriving restaurant work, Chef Marc stepped out on his own and launched his own company, MBynumCreations. The company specialized in hospitality consulting and private events. MBynumCreations allowed him to appear at countless charity events where he drew attention to causes that he is passionate about like childhood obesity and depression.

In late 2015, Chef Bynum returned to the Food Network to compete in Chopped: Impossible featuring other Chopped Champions. History repeated itself and he was declared Chopped Champion, however once reaching the season finale, he was eliminated.

In 2016, Chef Marc held several accomplishments including providing craft services for Saturday Night Live; serving the CBS Morning Crew; personal chef services to A-list celebrities and diplomats, an appearance on SiriusXM Hip Hop Nation. In the same year, Hush Bistro was named one of the top 100 Bistros on Long Island. The most memorable achievement in 2016 for Chef was having his signature St. Louis Ribs featured on the O List of the O Magazine in the July Issue with a mention on the front cover of the magazine.

In August 2017, Chef Bynum fulfilled yet another part of his MBynumCreations vision with the launch of Hush Huntington. The big brother of the original Hush Bistro located in Farmingdale, New York.

In 2019, Chef Bynum distanced himself from former partnerships and focused on MarcBynumConcepts, formerly MBynumCreations, which is the hub for Chef Marc’s catering and consulting. Cooking In Color is Chef’s cooking show that can be found on The Lounge Channel on FB and RoKu and he is starting to write his cookbook and hopes to launch independently.

After 25 years in the kitchen, Bynum is starting to give more attention to mentoring, motivational speaking, and building a media platform not just for himself but for the growing number of young chefs and business professionals looking to make their mark.

“The love for the kitchen and creativity is stronger than ever, just looking for more ways to let The Food Speaks”. – Chef Marc

Is excellence something you believe in? We do.

Chef Marc Bynum, as seen on the Cover of O Magazine!

Featured on Holy and Hungry. We are just getting started.