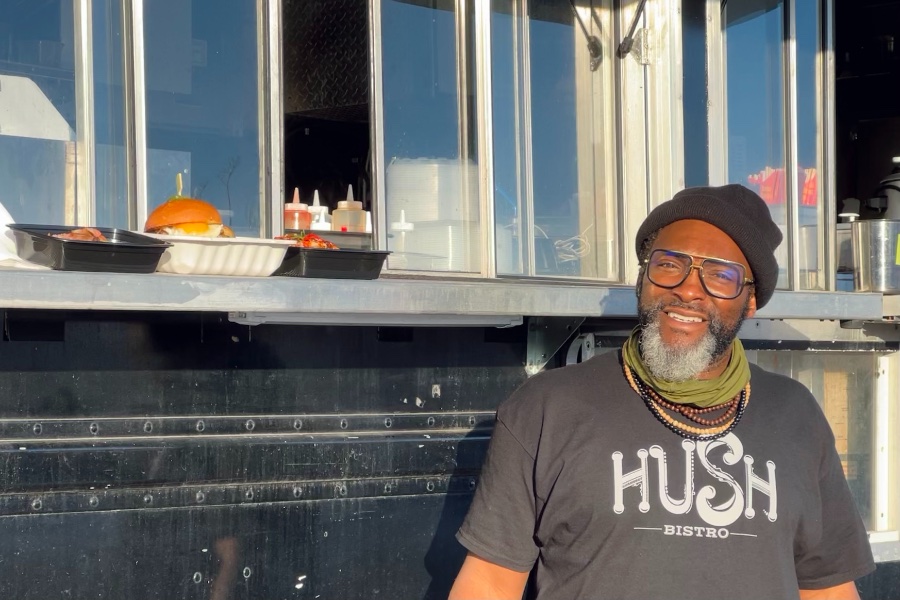 Posted at 17:11h in News by Marc Bynum Creations

The 43-year-old chef is cooking up ramen and handheld foods with flavors beloved around the world on his new Hush Food Truck.

Long Islanders are likely familiar with Bynum and the Hush name. The three-time Food Network “Chopped” champion opened his first restaurant, Hush Bistro, in Farmingdale in 2014. He also runs catering through his Marc Bynum Concepts brand.

Alongside ramen noodles on his new truck, Bynum boils down three decades of culinary experience he acquired through books, networking and travel.

“In order for you to be the best, you got to eat the best,” he said. “If I want good Mexican, I’ll go to Mexico, cook with the abuelas. I’ll make the barbacoa with them in Puebla.”

“I always want it to be authentic, and then once I understand how it is, then I can take my knowledge and make it my own,” he added. “So it’s not necessarily traditional, it’s my tradition. It’s my spin on it.”

The other half of Bynum’s menu is a selection of ramen bowls. The Shoyu ramen boasts duck confit, dried tomatos, pickled golden raisins, scallions, garlic oil and nori paper. Spice fans will crave the spicy shrimp or the lobster miso, aka the “bad & bougie.” The chef said the latter is a top seller with it’s lobster miso, butter poached shrimp, corn, fennel, chili oil and scallions.

“The beautiful thing about ramen is it’s such a new cuisine, it’s only 100 years old,” Bynum said. “So you can still put your mark on it. I can literally take my barbecue, my soul, my French technique, my Italian technique, all of those things and (blend) it with Japanese and Korean techniques, and it’s just different.

“And it’s not like everybody else’s ramen,” he added.

With seven books about ramen on hand in his truck, Bynum is a lifelong learner. While cooking up food in various communities, he hopes to develop in his followers a similar hunger for knowledge.

“I don’t want everybody in my community and every food desert on Long Island and New York to always have to just eat fried food, and stuff with a whole bunch of cream, and not good vegetables,” the chef said. “So that’s really my focus, as much as it is a restaurant, it’s educating.”

“I want to see people like me, that look like me, in high-end restaurants on Long Island,” he added. “I don’t want to say I’m one of one, but for the most part, I’m one of one, and I want to change that. It’s more about teaching what I’ve learned over the past 30 years and teaching it to the new generation. And hopefully they’ll take it and listen.”

Bynum hopes to turn his truck into a platform for aspiring chefs. He said they can cook with him in their communities and educate residents not only about food, but overall health and wellness.

He is also finalizing “From Guns to Butter,” a series of courses with guest speakers and chefs that he will run in Nassau County. The program is a culmination of dual passions to educate young would-be culinary masters and to provide second chances to formerly incarcerated individuals.

“It’s not easier than the street, in a lot of ways it’s more difficult,” Bynum said of the kitchen. “It’s not about your hands and fighting — it’s about using your brain.”

Hungry Long Islanders can order from Bynum’s Hush Food Truck from noon-7 p.m., Monday to Friday at his regular spot in the Farmingdale Stop & Shop parking lot. People can follow his Instagram to see when and where he will park his mobile eatery on Saturdays.

The chef’s fans can also stay up to date on his menu, as it may change drastically down the road.

“In the next three months, I might not be doing ramen, I might be doing tacos or something like that,” Bynum said. “As a consultant, as MBC, I develop concepts. This is my rolling concept truck. It’s just fun. I’m back to having fun again and that’s what I really want.”