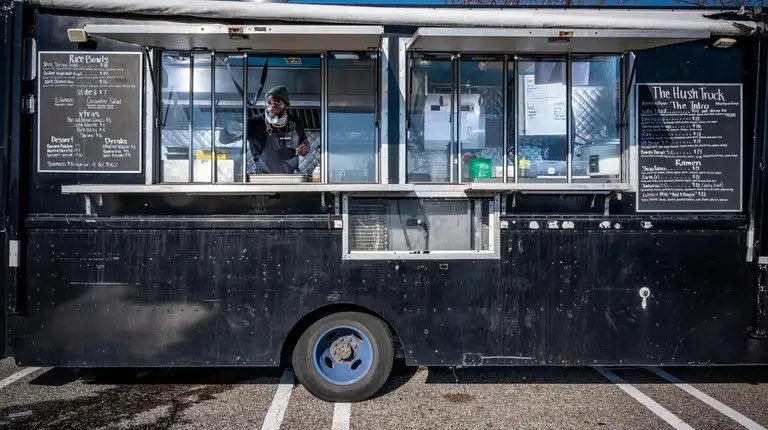 Posted at 17:07h in News by Marc Bynum Creations

It’s 11 a.m. on a weekday morning when Marc Bynum drives a slightly battered black food truck into the corner of a Farmingdale parking lot and begins prepping for lunch service. Assisted by a lone cook, Christian Merino, he turns on the generator and organizes his mise en place. He preheats the flat-top grill and turns on the five-gallon pasta cooker to bring the water to a rolling boil. A little before noon, he hangs his menu onto the side of the truck, retracts the panels that cover the windows. Hush Truck is officially open for business.

In 2017, Bynum had ascended the summit of Long Island dining. After a decade of distinguishing himself in other people’s restaurants, the chef had been running his own, Hush Bistro, for three years. Fulfilling a lifelong dream, he’d opened the 26-seat bistro in his hometown of Farmingdale and had been rewarded with more business than he could handle. Now he was hitting the big time, partnering with an established restaurant group and moving Hush to larger premises smack in the middle of Huntington Village. In 2018, he and his partners opened a second Huntington concept, MB Ramen. But by the end of the year, he was gone from both restaurants, as well as from a short-lived venture in Bay Shore. And he stayed gone.

Why Bynum, 43, took a three-year break from the restaurant scene is complicated, but the bottom line, he declared, is: “I’m back. And it’s time to go to war.”

Talk to Bynum for any length of time and you’ll be struck by his frequent use of martial terminology. His “war,” “wartime” and “battles” refer to concentric rings of conflict: At the center are the fights he wages against himself, the depression and anger that have plagued him since childhood. The widest rings are societal — racial strife, class struggle, political crisis.

The intermediate rings pertain to the current dining culture. Bynum fights against the idea that DoorDash can replace the restaurant experience. A master of social media, he nevertheless rails against how it has distorted contemporary cuisine. “How a dish looks is nothing compared to how it tastes,” he said. “And just because someone has 100,000 followers does not make him a chef.”

Bynum knew he wanted to be a chef from the age of 14. “My mother said people are always going to be sick and people are always going to be hungry,” he recalled. The medical-school route was a non-starter “because it was … more school.” But from the moment his Nassau BOCES instructor, Mario Bucci, put a knife in his hand, he knew his destiny was in the kitchen. During high school he got a job at Margo & Frank’s Mermaid in Freeport then went on to various fast-food restaurants and the Melville Marriott. In 2004 he was working at Carlyle on the Green in Bethpage when “I saw a Black chef, the chef of Tellers, on the cover of Part 2 in Newsday and I said that was going to be me.”

Five years later it was. He had first started attracting local attention in 2007 as the chef at Rookies, the sports bar that preceded The Rust & Gold in Huntington. After a short stint at the Bohlsen brothers’ just-opened Prime in Huntington, they appointed him executive chef of their Islip steakhouse, Tellers. In 2009, that job got him his “cover,” but by the end of the year he had left the restaurant.

In 2010, Bynum won two episodes of Food Network’s “Chopped” and, through his new consulting business he opened Venue 56 in Hauppauge, Cue Nine in Levittown and Moo Burger in Brooklyn, among other restaurants. The money was good and the lack of commitment suited him. “I like to be on the move,” he said. “I love building concepts, setting them up and putting in the lighting, figuring out the music. Then it’s 90 days and I’m out.”

But he also yearned to build something that expressed his own vision, and to build it in Farmingdale. It took over a year but in 2014, Hush Bistro opened in a former abandoned grocery that he gutted and designed. The tiny restaurant was dominated by a 12-seat bar behind which was the open kitchen. It was here that he first conceived the Hush burger, topped with aged cheddar, bacon-onion jam and a sunny-side up egg, and the chicken wings that were confit-ed overnight in olive oil steeped with cinnamon, coriander seeds and star anise before getting sear and a smear of gochujang, siracha, honey and yuzu.

And it was at Hush that he conceived the coffee-chipotle ribs that, in 2016, appeared on the cover of “O, The Oprah Magazine” as “the greatest ribs Gayle’s ever tasted.” He also took home a third “Chopped” win and bought the Hush Truck — though it mostly stayed in the parking lot behind Hush.

Bynum had complete control, but that created its own problems. “I got tired of it just being me,” he said. “I needed help with the weight of the place — the payroll, the rent, the worry about checks bouncing. I would literally drive by the restaurant to see if they had cut the gas off — I could tell they hadn’t if I could see the pilot light on the stove flickering.”

Then, too, there was his ego, which wanted a bigger stage in a hotter setting. In 2016, Bynum partnered with Reststar Hospitality Group that operates, among other Long Island restaurants, Cafe Buenos Aires and Bistro Cassis in Huntington. Bynum took over Salumeria Pomodoro and turned it into a Hush Bistro twice the size of the original. A year later he opened MB Ramen to take a deep dive into the Japanese noodle dish.

But the partnership with Reststar lasted less than a year (although MB Ramen has thrived and is planning a second location in Port Washington). Bynum’s next venture, the much-ballyhooed Fatwood in Bay Shore, closed after five months.

“Hush was where I felt most alive, but the ego of my anger, the anger of my ego, that’s what got in the way.”
-Marc Bynum

Bynum concedes that he was not a great partner in either relationship. “Whether I was the employee, the boss or the partner,” he said, “I always felt like I was the only horse in the race, doing all the grunt work but also not really trusting anyone else to do it.” Not only was he alienating his peers, he drove away employees. “When I was coming up,” he said, “I was put through hell. And I put my cooks through hell. I wanted them to do things the right way but people want to feel like they have a purpose at work. if you keep turning over staff you can’t make money.”

Aside from a summer Hush Truck pop-up at Prime in the summer of 2019, Bynum spent the next three years out of the culinary spotlight. He cooked at Southside Hospital in Bay Shore and he catered for vaccination sites in Long Beach, Old Westbury and Aqueduct Racetrack. And he kept up the consulting business. But he turned most of his energy inward. “I was in my fortress of solitude,” he said. “It was time to take a look at myself.”

Underlying all his struggles, he came to believe, was an unquenchable anger that stemmed from being abandoned by his father before he was born. The pain came into sharp focus on Father’s Day in 2021 when he was reflecting on the day he’d just spent with his three kids in Greenport, how he’d summoned them back from the surf when it was time to go. “I realized I don’t even know what my dad’s voice sounds like,” he said. “He could call out to me and I wouldn’t know it’s him. That rocked me. And I cried like a baby.”

A second source of pain, he said, was that ever since he started his ascent through Long Island’s fine-dining world, he always seemed to be the only African American chef. “Coming up in this industry where I’m the only Black guy in the kitchen, it was difficult. I was at places where they’d let me prep but not put me on the line. Later on, I’d get priced out of a real estate deal and then I’d see a white-owned restaurant take over the same space for less money. The anger fueled me, but it put a chip on my shoulder, made my ego even bigger.”

The further away he got from the original Hush in Farmingdale, the angrier he was at himself for succumbing to the temptation of bigger and better. “Hush was where I felt most alive,” he said, “but the ego of my anger, the anger of my ego, that’s what got in the way.”

Shortly after that fateful Father’s Day, he had another breakthrough, a call to action. And it was the food that called. “I was working on this soba salad for a client and it was too good, I didn’t want to give it up.” That salad — cold buckwheat noodles, pickled shiitakes, carrot, daikon, red onion, mint, basil, cilantro and ginger-sesame vinaigrette — became the first item on the menu at the Hush Truck. The burger, the wings, the ribs all joined in, along with four types of ramen (pork, duck, vegan mushroom-squash and miso lobsters) and a few more bowls.

The truck offers flexibility — he’s already been in two Farmingdale supermarket parking lots, and a more permanent home for the truck along 110 is being negotiated. (The truck’s weekday whereabouts can be tracked via Chef Marc Anthony Bynum on Facebook and @chefmarcbynum on Instagram.) Weekends are his own to do private events or just kick back. It’s also a return to the open kitchen where he can engage his customers as he is cooking for them.

He does not envision being on the truck a year from now, but he says he is committed to the Hush concept and to expanding its reach while staying in Farmingdale. “I want to train young kids to cook. I want to help build a network of Black chefs on Long Island. I want to get into the community, teach folks about eating better, eating more vegetables.”

It’s a big challenge but he’s up for it. “After everything I’ve been through, why am I here?” he said. “There has to be a bigger purpose than just a restaurant.”